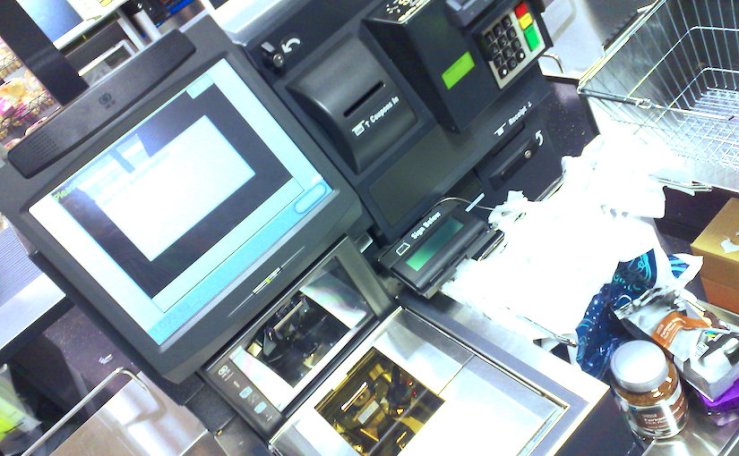 Self checkout machines, once an amusing novelty, are now just another mundane fact of life. A harried clerk rushes between impatient, sighing customers. The customers put unexpected items in the bagging area. The machine sits stupidly, admonishing us, eating our money, spitting out change, and, in the meantime, taking our jobs.

These machines obviously raise questions about human labour. How many staff get fired when a supermarket introduces self checkouts? Is this part of a larger pattern where machines replace humans in the modern workplace?

Also interesting is seeing the power dynamic shift in favour of the machine. In the past, the clerk controlled the checkout. Now, the machine issues the orders. The clerk is reduced to being the machine’s assistant, there to help when things go wrong.

But there’s one thing that’s always puzzled me.

Why aren’t self checkouts fun? At the very least, why aren’t they satisfying? If this sounds like a strange idea, hear me out.

Self checkouts always look ugly. You don’t want to look at them, still less touch them. There’s no necessity for this. When Apple introduced the iMac G3 in 1998, the entire computing industry was blindsided by the idea that a desktop computer could look nice. Eventually they caught up, but it took a while. Now with self checkouts, it seems like we’re back to square one. Appearance is an afterthought to more grown-up concerns like functionality and security.

It may be stating the obvious, but sounds have a big impact on our mood. Pleasant sounds make us happy and ugly sounds make us annoyed. The sounds made by self checkouts tend towards the ugly. To give one example, the Tesco near my house has a block of about ten self checkouts. They don’t make noises, but they do all talk over each other, creating this echoey, hellish chorus.

Computers don’t have to talk like computers. We can program them to talk more like humans, even if the results are a bit hit and miss. Google and Apple are working on this: their products talk to you like a relaxed but attentive Californian. “Whoops – something’s not right”; “Nope”; “All right!”. It’s a world away from the language computers used to use when they talked to us. “Error”. “Syntax error”. “Fatal error”.

How would a polite shop assistant talk to a customer? It’s a safe bet they wouldn’t flatly state, “Unexpected item in bagging area”. They’d say something more human, like “Ooh dear, I think you’ve left something in the bagging area”

I’ve used self checkouts in Tesco, Sainsbury’s, Lidl, Asda, M&S, Co-op. They’re all pretty much the same. At some point, someone’s going to realise that a pleasant self checkout draws customers. Maybe they’ll get someone in from Apple to help design them. Maybe they’ll get someone in from the slot machine industry. I don’t know. But I’d be surprised if these machines carry on as they are, especially with so much money at stake.

Self checkout at M&S